In which I attempt pie and do things with eggplant. Some success, some… not so much success.

Interview with Andrew (who makes tarts/pies)

… is a terrible heading, and I am sorry.

Anyway: I made pickles! I pickled pears, and I pickled eggplant.

The pears were courtesy of a friend who managed to salvage 2kg of them from a tree before the rosellas ate them all. I had had pickled pears at Kate’s house, with cheese and then in a chicken salad, and NOM. These were different from the ones she had: I used white vinegar and cinnamon and cloves; I used a recipe that was meant to be for pickled peaches (whichL whoa. If ever I get cheap peaches…). Kate used cider vinegar and rosemary and pepper corns; that will be my next trick, if I get more pears.

The eggplant were from my garden, because BY GOLLY I’m getting a lot. Trying to figure out when the darned things are ripe has been a hassle, since the first info I looked at was all about what the fruit look like on the INSIDE… which is less than useful. Finally I found someone who said eh, if the skins are shiny they’re probably fine. Which meant I got to go and harvest a lot. So I made pickles! They don’t look very appetising, hence no photo, but they have turmeric and cumin and lots of ginger (side note: I discovered that peeling ginger with a spoon is EXACTLY as awesome as all those people have ever said).

I am now about to make moussaka with more of the eggplant, so hopefully that goes well…

On Saturday night we decided to have friends over to play a rather obsession-making board game, and treat them to a Middle Eastern feast. They had lavished us with a beef bourguignon that left mine for dead and a delightful lemon tart last time, so it was only fair…

First course was a eggplant brushed with homemade chermoula, baked for 40 minutes, and topped with a burghul salad that included coriander, green olives, and nuts. It was fantastic although not actually as good as it could have been – I used those awesome long Lebanese eggplants, which were tasty but because they were skinny, didn’t get as mushy and baba ganoush-y as they would if they’d been fatter.

Next, my darling made him favourite dish – lamb and braised egg. We minced lamb eye fillet and cooked it with harissa, pistachios, preserved lemons and other good things, then braised eggs in it. Served with flat bread, it was utterly delightful. Both of these are from the fabulous Jerusalem, which is probably my favourite cook book ever.

Finally, Egyptian filo pudding, from Moorish. Cook filo sheets; break them into pieces and layer it with rosewater-soaked dried apricots and currants, and pistachios and almonds. Then cover the lot with boiling custard, basically, and cook… it was utterly, 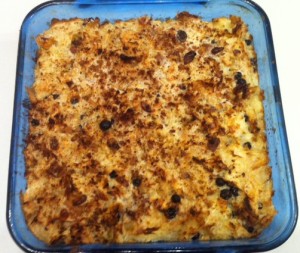 utterly delightful; more-ish, in fact. The picture does it no justice whatsoever.