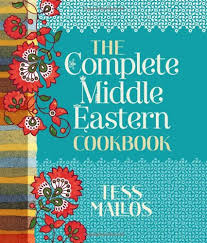 I’d been wanting this book for quite a long time when I finally saw it on sale and cracked. I like that it doesn’t just have the standard ‘Middle Eastern’ countries that I think Anglo-Australians think of when they think of food; it’s got Armenia, The Gulf States, Yemen…. So my thought was to try and do a week or two of mostly cooking from on country. Obviously that’s going to be harder or easier depending on season, as to what we feel like; and some ingredient will make things hard. But I figure it’s a good way to try new things and make my way through bits of the book.

So my first foray was into Cyprus. It’s not the first country in the book – that’s Greece – but I thought starting with Greek was cheating because I already know at least some Greek food.

The very first recipe is for haloumi. I am intrigued by the idea of making haloumi but I can’t imagine every actually doing it. Unless I hit some holidays and I get really adventurous… which may well happen, not going to lie.

I also don’t think I will be marinating or frying brains (appetisers). Yes, I happily own to being a culinary coward.

Page-wise, the first recipe I tried was the Kolketes (pumpkin pies; appetiser). This was a bit harder than I had expected. Making the filling of pumpkin and bulgur and spices was a cinch. But the pastry wasn’t nearly as easy to deal with as I had expected, and I got a bit frustrated. This was compounded by the instruction to roll the dough out “about the thickness of a normal pie crust” which is not at all useful if you’re not accustomed to making pie crusts. As I am not. So I just had to guess. Ultimately I managed to make the

pies; they were quite tasty. However the pastry has made me leary of trying them again.

Next was haloumi bread. Yes yes yes and yes. I can also imagine just making the Kouloura bread dough by itself.

Further on we hit vegetables, and I made Yemista – stuffed vegetables. I can’t quite imagine stuffing eggplants and my love isn’t a huge fan, so I just went with tomatoes and capsicum. I’d seen some American cooking show where the woman did ‘deconstructed’ stuffed capsicums – don’t worry, she was being sly about and knew this was entirely the cheat’s way of making them – and I had every intention of making the filling (mince, rice, tomato) and then piling the capsicum and tomato on top or something. But in the end I actually properly stuffed them (and how organised is this, I made that bit the day before and just had to cook them the next day for dinner!). They were quite tasty, although I think either the stuffing or the sauce (which was a very basic tomato sauce) needed something a bit richer. Possibly just more tomato.

Then there’s Afelia, which is apparently anything with cracked coriander seeds. I made mushrooms with coriander – fry them off, add some red wine, add coriander – and given I love coriander in all its forms I liked it. I would have liked more ideas in this section about what sort of food it should accompany, though. I also made the pork version, which was quite a Moment for me since I’m not sure I’ve personally cooked pork more than… once before? Basically it just tasted like coriander, though; I didn’t think the pork came through at all. Maybe that’s just pork.

Finally, fish: Psari Savoro (fish with rosemary and vinegar). I used Australian rockling. We went through a bit of a fish phase a few years ago but haven’t been back in ages; I’ve just not found a convenient and good fishmonger. There’s apparently one a bit north of where we are, though, that I’ll have to try – I think this cookbook is likely to have some good seafood recipes. Anyway: salting the fish was an intriguing suggestion, and then coating with flour of course made it crisp up a bit and leave flour to thicken the sauce. My love cooked the fish and did it very well. The sauce was made up of garlic, rosemary, vinegar (we used cider instead of brown) and white wine. It thickened up heaps more than I expected, and was basically tasty although too heavy on the vinegar for my taste. One I will quite likely be revisiting.

Starting with Cyrpus was an … interesting choice. It wasn’t an overwhelming success – I didn’t love everything – but there wasn’t anything that I hated the taste of. I’ll be a bit more cautious as I go further into the book as I’ve not always found Mallos’ instructions to be as straightforward as I’d like. With both the pork and the fish, she says to fry until ‘just cooked through’ – but no instructions about what that looks like. It’s surely not hard to say ‘until the pork is white through’ or ‘until the fish is white and flakes’? Even expert cooks aren’t going to get annoyed by a few extra words, are they?

None of these were particularly photogenic, hence the lack of pics. 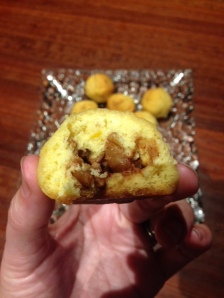 Caution: trying to say the name of these biscuits as an Anglo can have dangerous consequences for earworms.

These biscuits were my first foray into the Greek chapter of Tess Mallos’ Complete Middle Eastern Cookbook. They’re honey-dipped cookies and they were, of course, a winner. They were a bit fiddly to make what with the kneading and then the pinching off and the adding the filling and then pinching shut, but in the end it was totally worth it.

The pastry is a pretty straightforward sweet one; it has both oil and butter which surprised me a little but they don’t come out particularly oily or anything. Orange zest and juice is a nice touch.

The filling is honey and cinnamon and walnuts and orange juice; it’s meant to have some almond essence but I decided it wasn’t necessary. You grab a bit of pastry, make a flat disc, put some filling in the middle and then pinch it together. Like I said, a bit time-consuming… but I made just over 40. (The recipe says 60; I presume my biscuits were 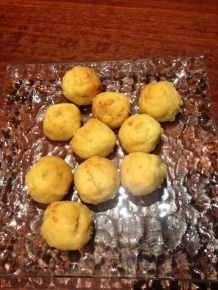 bigger than they’re meant to be.)

After they’ve cooked you also dip them in a honey syrup; you only dip the ones you’re going to eat immediately. I made some for friends, but didn’t dip them all; I’m not sure how long they’ll last. Ate some that had been dipped the day before – they still tasted fine, although yes probably a bit better when they were fresh.

I can imagine making these again although it will have to be an important event to make the time worth it.

Some time back I discovered that thanks to the glories of online shopping (I do not enjoy grocery shopping), I could purchase a 1.5kg container of haloumi. The price was way better than the little individual serves, and it lasts for months in brine, so I thought – why not?

When it arrived, I discovered that the store had been out of the 1.5kg container of haloumi. So they made a substitution.

For a 2kg bucket of haloumi.

When I announced that this had happened, someone innocently asked: what was I planning to do with haloumi aside from pan-frying it?

To which I said “… why would I do ANYTHING aside from pan-frying it??” 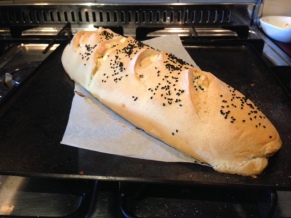 A colleague at work, with Greek-Cypriot connections, tells me that Cyrpiots will eat (non-fried) haloumi with watermelon. I’ve not tried that. What I have tried, now, is haloumi bread, or haloumopsomi. And friends, it is delightful.

The bread is from Tess Mallos’ book Complete Middle Eastern Cooking, which I’ve just started to explore. I’ve been going through the Cypriot section, which I’ll report back on in a day or two. Anyway, the recipe asks you to make bread according to the recipe for Kouloura dough and then instead of turning it into a bread 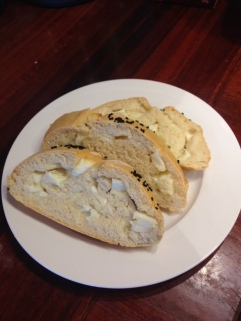 ring, you push it out into a rectangle; dot it with 250g of haloumi; then roll it up and tuck in the ends. TA DA.

The recipe suggested sesame seeds but I adore nigella seeds so that’s what I went with. It was fairly large, as you see, so this served to accompany two dinners for two of us… because we managed not to be incredibly greed the first night. Came up fine the second night after a little while in the fridge to take the chill off.

The only hard part is the kneading, and at least some of that could just be done in the mixer if I’d thought far enough ahead. Still, kneading is a cathartic experience…