After discovering T2’s Earl Grey, of course I started exploring some of their options. I mean, that’s just obvious. And why wouldn’t you go trying one that had ‘royale‘ added to the name, and made me think of Samuel L Jackson every time I drink it?

Normal colour. Almost… savoury? scent. J suggests that it smells like haystacks (I was having trouble pinpointing it).

Taste: it’s definitely on the savoury side. T2 claims it to be ‘smoky’. Personally I loathe tea that smells like bushfires, so you won’t ever have me drinking Russian Caravan or T2’s London Breakfast, but this is ok. It’s not especially bergamot-y, and it’s definitely enhanced (for me) by sugar. It is infinitely more drinkable by the pot than T2’s ordinary Earl Grey, though.

This is quite a different Earl Grey for me. I like it, but I 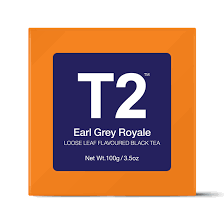 don’t really associate it with Earl Grey. T2 says that it’s “Yunnan leaves blended with bergamot produce a mysterious and complex brew.” Complex: I like that.

The Art of Tea is a Tasmanian business; I had the joy of interviewing Sam for the podcast a good few months ago. They have a great range of Earl Greys and one of my favourites is their French Earl Grey. Definitely not for the anti-flowers in their tea brigade! 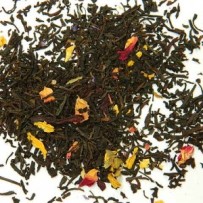 Taste: also very floral. I like it a lot, although it’s not especially orange-y or even citrus-y. The box says it’s got hibiscus, sunflower and rose in it. Curious, I added 1/2 tsp sugar. It did not turn it into an overpoweringly sweet beverage, as I feared; in fact, it reduced a slight bitterness (which may have resulted from over-steeping?).

In this episode I discuss a failure, some successes, and talk to some children about what favourite foods are…

I mentioned the London Strand Earl Grey the other day. But that’s not all I bought at the Twinings store, oh no! I also bought their Orangery of Lady Grey! Because I love Lady Grey nearly as much as I love Earl Grey! Fight me!

Normal colour, and quite a citrus-y scent. There’s definitely lemon going on there, as there should be. 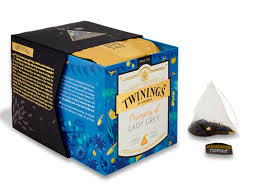 Taste is also distinctly lemon. Better with a bit of sugar (3/4 tsp) – brings out the lemon a bit more.

I finished the London Strand overseas, because once it was open… well, I wasn’t going to leave it for the Customs peeps (sorry folks). So I only have this one left and let me tell you, I am EKING THEM OUT. Slowly.

I mentioned my early love of Twinings Earl Grey a month or so ago. So when we were in London and someone mentioned that the original Twinings store a) still exists and b) has a bit of a museum going on, I knew I had to drag my darling there. It turned out not to be a hardship because it was pretty central. It’s a teeny little place, with a narrow entry and some old tea-related paraphernalia at the back. At the front, they have a big pick-n-mix area… and some exclusive teas. I had to be careful because a) suitcase and b) customs. Which was sad because the beautiful fancy tins were not heat-sealed. So I ended up getting teabags of some tea which I thought was exclusive to the shop but turns out to be just a fancy collection.

Strong scent in the box, and when steeped, although not overwhelmingly orange-y.

Has an odd aftertaste. This is the first time I have agreed with people that it kind of tastes like dishwashing liquid!

CUE PANIC. Could I have found a terrible Earl Grey, and from the Twinings Discovery Collection no less??

Thankfully, no. It turned out that the weird aftertaste wasn’t the tea… it was the Parisian water that made up the cup of tea. Because when we made it in a wee village in southern Germany, called Beubenreuth, it was far nicer. Still not my favourite cup of, but very drinkable.

Twinings says that it has a “sunny twist of citrus flavours and lemon peel [added] to the deep, black China tea and bergamot flavour blend.”

I interview Richard Condie, who has a great passion for cooking and also an incredible vegetable garden (and fruit trees).

As I mentioned: Vege Bouquets