Yesterday, the book. Today, the food.

While I quite liked the recipes I’ve tried from this book so far, I have to say that I am not the target audience for this book. I am not one for making particularly pretty objects. I have neither the patience nor the vision to experiment with different piping techniques. I am more interested in flavour than appearance, so I found this book a little frustrating. For example: I made the basic cupcakes, and they are a fine cupcake. I liked them a lot. But the only flavour variations suggested are to add zest; or cocoa and a bit of chocolate; or put a berry into the middle. And those are fine suggestions… but I’d rather be playing with nuts and rose water and so on. This isn’t a problem with the book itself – it’s a mismatch between what I want and what Khoo’s intentions are. If I had the patience and skill, I love some of her styling suggestions: topping a cupcake with a meringue rosette, a macaron, and a mini Oreo, all on top of dark blue buttercream? Spectacular! I just can’t see me doing it.

Anyway, what I have cooked: the cupcakes, as mentioned. Very nice. Also made her buttercream, and used it to top 16 cupcakes rather than the six she suggests!

Donuts. Oh yes. Courtesy of Alisa, I have a six-hole pan, and I made them and they are great. The first time I actually had no milk so I used double the yoghurt, and I think they might have been a bit better than the next lot with half yoghurt, half milk. At any rate, they are delicious and easy, too. The second time I made them I even followed the suggestions for icing: I made the basic ombre icing and used one drip of colouring, and iced a few… then added another drip of icing and iced a few more… and so on. And yes, having that progression of colour was indeed delightful to look at. So that sort of easy styling, even I can manage.

Ice cream: I have an ice cream machine and have followed the recipe that came with it. Khoo’s recipe is very similar, and didn’t have a different texture that I could perceive. I did follow her suggestion of making lemon ice cream, and I also followed her suggestion of mixing and matching two flavours. So as well as lemon, I made lime ice cream, using a couple of leave from my makrut lime. I think I should have used a bit more because it wasn’t quite as lime-y as I had hoped, in the end. I even amused myself by adding a drop of yellow to the lemon and a drop of green to the lime while churning. Together, they were indeed excellent.

Waffles. Yeh, I made waffles. I now own a waffle iron. I’ve tried a few recipes, which I’ll blog at a later date. In terms of the recipe here: firstly, we discovered that the waffle iron Khoo is using must be a lot smaller than ours, because while her recipe says it will make six, we made four that weren’t full size. In terms of taste, I really liked them; the texture was smooth and they rose nicely. I haven’t made any of the suggested waffle toppings because we’ve mostly had them as a savoury thing so far!

I don’t tend to make cocktails, but I happened to have strawberries in the house when I noticed this suggestion: put halved strawberries into some gin; allow to steep; drink. So I did. And it was delightful.

The most significant chapters of the book are the ones on styling cakes. I admit I skipped past those, because the idea of building three layer cakes and then decorating them with cascading meringue makes me freeze in fear.

At some point I will make macarons. For sure. Definitely. No doubt about it.

More birthday cupcakes! I’d been eyeing these off for a while but the ingredient ‘creamed coconut’ put me off because I had no idea what it was. I finally googled it and it’s just coconut butter/ oil – which I have, so that was easy. Interestingly, although they have both coconut butter and desiccated coconut, they ended up tasting more lime-y than coconut-y to me. They have lime zest in them, and I had a nicely sized kaffir lime on the tree so I used that. I’m not complaining about the taste – in fact I thought they were quite lovely (yes I make more than I give. Of course). I’ll be making these again – when I have limes to use, anyway. 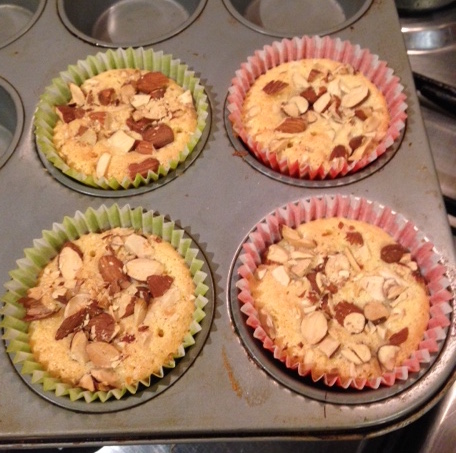 The full recipe makes 12, you say? I say your cupcakes must be a lot smaller than mine, because this is a half batch and as you can see, they are hardly overflowing.

Gluten free cupcakes! I had no potato flour as the recipe required and little likely use for it in future. So I consulted my Gluten Free Guru (my sister) and she told me to substitute in rice flour, which I had because shortbread. So I did. Not sure what it will have done to the texture because as you can see, Bob, there were NO EXTRAS for taste testing. The batter seemed ok.

Also they’re not quite as pretty as the cookbook illustration because I had no slivered almonds so I chopped up some dry-roasted whole almonds. Taste should make up for ordinariness of appearance, I hope.

These were meant to be maple pecan cupcakes.

But I didn’t have any pecans (that’s PEEcans, as far as I am concerned), so I decided to substitute walnuts.

I didn’t have as many walnuts as I thought (uh… hardly any), so I mostly used almonds.

The icing was also meant to have candied pecans on top but sadly for their recipient I lost my desire to candy nuts somewhere and I haven’t found it again.

The icing does have butter, icing sugar, and maple syrup – and it has a wonderfully smoky sweet flavour as a consequence. The cupcakes themselves did not have the greatest texture; they really stuck to the paper, which made me a bit sad. Still, tasty enough.

Further to my plans to celebrate birthdays this year, these are apple and cinnamon cupcakes. They were supposed to have sour cream icing but I ran out, so I just made lemon and icing sugar icing; they were also meant to have berries on top but a) too hard and b) don’t keep as well.

I’m having fun with these.

I was given a book of cupcake recipes some time ago, but I’ve never made many. Thought I’d rectify that this year. These are pistachio ones – with ground pistachios in them and all.

Icing these involved making two batches of icing, because in making the first one I discovered that my class old-school sieve whose handle I’ve needed to fix for years was rusty when I noticed black spots all through my nice pristinely white icing. Sad.

They’re the beginning of a year of birthday cupcakes. Well, that’s the intention anyway.