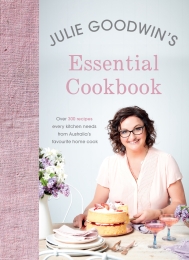 Yesterday I talked about the book as an object; today I will discuss some of the recipes I’ve followed.

Because this is aiming to be an ‘essential’ for the Australian family, I thought I should make some things that I was already pretty familiar with, to be able to see how these compare with things I’ve already made.

Osso bucco. I don’t always – in fact, never – brown the meat before throwing in the slow-cooker, but I did this time. The recipe isn’t specifically for a slow cooker but it is suggested as an option at the top of the recipe.

Cheesy meatballs: stuff a piece of mozzarella inside straightforward meatballs (3/4 pork, 1/4 beef) that already have parmesan in them too? Oh heck yes I am there for that. These were great, and easy.

Chicken and chorizo paella: very tasty, very easy. Not Goodwin’s fault that I kept itching to stir it because I have way more experience with cooking risotto.

Cannelloni: stuffed with ricotta and peas and pine nuts, wrapped in fresh lasagne, baked with a tomato sauce. These were fantastic; I’ve not used fresh lasagne sheets before and it’s a great idea (cut in three, width-ways).

Scones! I have made scones before, and have recently discovered that the point is to mix them very lightly. Goodwin makes this point strongly. They weren’t perfect but that’s my fault: I didn’t turn the oven on early enough so it wasn’t as hot as it should have been, and my guest was arriving soon… so I had to cook them for longer than prescribed. Nonetheless they were quite tasty, and as light in texture as I had hoped. I am intrigued by the notion of adding lemon zest; I didn’t add as much zest as suggested (three lemons’ worth) partly because I wasn’t going to make the curd (next time, Gadget) and partly because I didn’t want the lemon to overwhelm the jam I was going to use (it was Kate’s jam, so you know… gotta let stars have their moments). The zest was definitely an excellent addition and I’ll be adding it from now on.

Apple crumble slice: I had to leave out the almonds because I was taking them to a nut-free venue, but nonetheless this was very tasty and successful. They kinda tasted like blondies, so I’m tempted to add white chocolate next time; I would also add more apple, as “three Granny Smiths” is not specific enough.

The recipes are easy to follow and those I’ve tried are great. This falls under what I guess would be “modern Australian” cooking: Beef Wellington, apple crumble, Victoria sponge and lamb sausage rolls; Greek chicken tray bake, coq au vin, Vietnamese fish curry, and Lebanese chicken… I have no hesitation in recommending this to someone just starting out in cooking, or someone who wants a good all-round home cooking book because they have plenty of speciality books already.