So apparently Australia doesn’t really grow gherkins, or when we do (commercially) 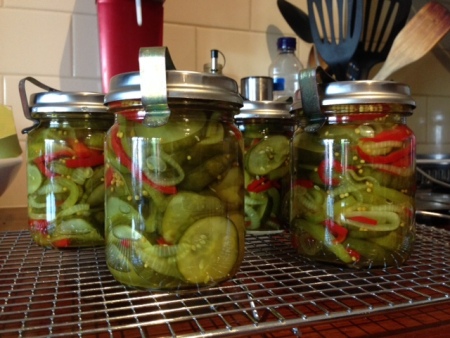 there’s little demand so the farmer asks a high price which means they don’t sell etc. However I’m told that Lebanese cucumbers work fine, so that’s what we’ve got here.

I halved the recipe, because I wasn’t sure whether I liked pickles enough for 2kg of cucumbers. I also (and this will get me into trouble with at least one person, possibly two) left out the celery seeds, because I couldn’t find them in the one supermarket I checked and I was too lazy to go check somewhere more specialty and I’m SURE IT WON’T RUIN THEM SHUTUP.

(Oh no i Just noticed that I think one of the jars has an air bubble. Dang.)

Anyway the difficulty today was that the recipe said to water bath for 10 min. But I was going to use the Fowlers, and I can’t find anywhere whether you’re meant to wait for the unit to get hot before timing or what. It doesn’t make sense to start from first putting the jars in with such a short time, because you start with cold water. And – gasp – the internet has been of zero use. So – again, gasp – I emailed Fowlers to ask. This is like a step beyond reading the instructions (which I’ve already done). So we’ll see what they have to say.

So. Pickles. Another life goal achieved.