I went to the Melbourne Tea Festival! I was pretty excited to go, although at the same time I was apprehensive; I don’t love crowds and I am easily overwhelmed these days. So I was worried that it would be just TOO BIG and I would find the choice overpowering.

Happily this was not the case.

I mean, I’m still amazed and impressed by the number of small scale tea blenders in Australia, and there were even some people there selling Australian-grown tea. But it wasn’t like a craft festival where there’s a dozen people selling identical stuff.

Well. Except they were all selling the same sort of product, I guess.

Also I just ignored all the naturopathic places, and if you’re selling Slimming Tea I am walking past.

ANYWAY. There were people selling black tea, green tea, and chai; I felt like green and chai dominated. Possibly because I don’t love those things, although my co-attendee, my sister, does like both of those so she was interested. This was my haul: 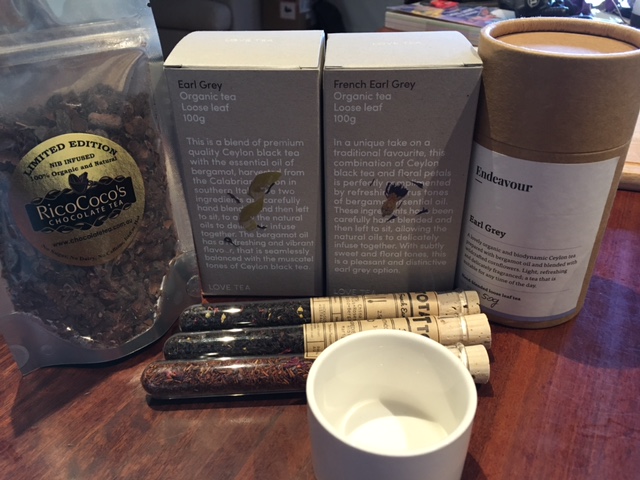 So yeh, I have a thing for Earl Grey (the two test tubes of black tea are both French Earl Grey). Partly this was in order to give myself a way of focusing; it would have been verrrry easy to just go completely nuts. At least this way I had some direction… and then there was the chocolate one. That’s made from the husks of cacao pods! How cool is that? Take the leftover stuff and roast it and serve it up as tea. Yes, it is still quite chocolate-y. The ceramic cup at the front was included as part of the entrance fee; pretty much everyone had tea brewing for you to sample, and that’s what you got to use. 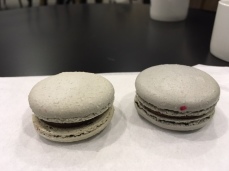 There were also some food stalls. In the spirit of my obsession, we had to try these Earl Grey macarons. They were very nice… but they were not very Earl Grey-y. WOE. (They were a not-very-overpowering jaffa, basically.)

I will probably be back next year.