This book was provided by the publisher at no cost. 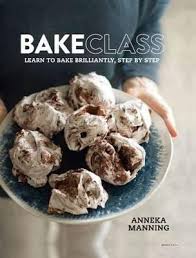 Previously, on BakeClass: rhubarb cake; self-saucing pudding; the book itself.

When I tried to make lamingtons, I mentioned that I have yet to conquer The Sponge. I thought that maybe BakeClass would help; after all, it’s got step by step instructions that are pretty clear.

The setting: one friend who saw The Fifth Element about eight years ago; another who had maybe seen bits; and a third who had never seen it. The perfect excuse to test my sponge-making abilities.

I carefully read the instructions, and they seemed to make sense. I got the eggs out hours before I was going to make the cake, so they would definitely be at room temperature. I measured everything scrupulously. I even did the grease the tin – line the tin – grease the paper thing as commanded.
I came unstuck at the last instruction: after sifting over the flour and cornflour, and then the warm milk and butter, I was to beat briefly until flour was combined – but not for TOO long. My panic was this: how do I KNOW when it’s combined? There was still a speck of

flour on the top; I presume that means it’s not combined? That cake-y type consistency at the bottom of the bowl, is that good or bad? Does it mean I’ve over-beaten? OH NO WHAT HAVE I DONE. This is the first instruction I’ve found in the book that’s not as precise as I would have appreciated.

And then it seemed to take longer to bake then it ought to have. Maybe it’s my oven. I should get on that.

Anyway, once cooked the sponge had this effect on the top. I think this was as a result of the cake-y consistency and that it means it was over-beaten. 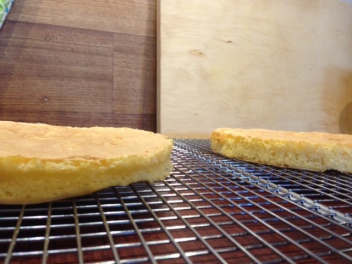 They didn’t rise as much as I would have hoped, as you can see. Still it must be said that these were better than the sponges I made last time, so I guess there’s hope? They were a bit fluffier, for sure.

I filled the cake with whipped cream, of course, and with Kate’s What Eve Did Next  – an apple and lavender jelly that’s just amazing. I sprinkled some lavender on top and everything. How fancy is that?

ETA: how could I have forgotten the result?? Despite my misgivings, five of us managed to polish the entire thing off over the course of the movie (which was only two serves each; the beloved managed to get one…). It wasn’t as airy as I would have liked, and a couple of spots tasted a bit… eggy, maybe? I think it was the swirly bit featured on top. The Eve was delicious but probably could have had a bit more added – the recipe called for something like 225g of raspberry jam, and I used nowhere near that much because it sounded far too over the top!