Some time ago a friend gave me a portion of Herman the German Friendship Cake, which someone slightly older than us said used to be Amish cake (I think) ‘back in her day’.

That ‘some time’ is probably about two years ago.

I followed the instructions and had a bit of fun with it, but I didn’t have many friends to give portions to. So after the specified 10 days I had some portions left. The site officially says that you shouldn’t refrigerate Herman, but sneaky sneaky it won’t be the end of the world if you do. So I’ve been experimenting, and have had two portions of Herman in the frig for a little while.

‘Experimenting’ here might be code for ‘kinda forgot they were there and occasionally got guilty about them taking up space in the frig but didn’t feel like baking with them’.

‘A little while’ may be code for… over a year now.

ANYWAY, I decided to pull out a portion last week and see how it was doing. Answer: fine, actually. Didn’t smell bad, didn’t look crusty; after being out for a couple of days and being fed, developed bubbles and continued to smell appropriately yeasty. And therefore I now have Herman to be baking with.

Adventure #1: standard cake. Well, the website’s standard cake involves apple and cinnamon, which – yes, yum, but I made changes. I have an enormous jar of Cherry Velvet from crazy-JAM-maker Kate (cherries, rose water, vanilla beans), which is a quite thick. So I got a few scoops of that, chopped it a bit to reduce the cherry halves, warmed it a bit so it would stir better, and beat it into the batter… et voila: 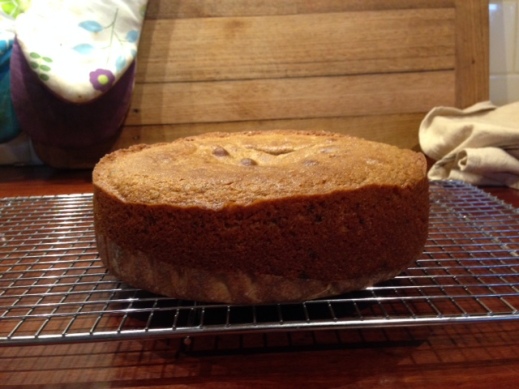 #2 portion went to the friend who came over for dinner and precipitated the necessity of cake-making.

#3: crumpets. Last time I made crumpets it was a somewhat protracted affair. This time, however, I started them the night as a friend had suggested. I used the same basic recipe but combined it with one of the bread recipes from the Herman site – so flour and water and milk and Herman and a dash of oil. Left overnight, added baking powder and more water in the morning, left it another while… and then

Damn fine looking crumpets. The mixture didn’t rise as much as I had anticipated so I was worried, but these were very nice, they rose while cooking, and were just a bit denser than store-bought ones. Served with Kate’s jam, as always.

#4: more Cherry Velvet cake, because why not? Slightly larger portion so I divided it into two pans; neither is as big as the one above, but that’s fine. They’re now in the freezer.

All made while wearing a Star Wars apron.