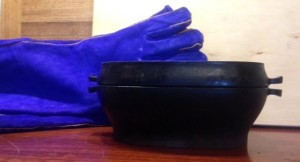 Those are welding gloves, because that cast iron pot gets placed directly into the campfire. And then it has to be taken out again.

We quite like camping, of all varieties. We have more tents than would seem entirely sensible. We also have a Landcruiser troop carrier that we’ve recently kitted out with a frig, and a rather nice cooking set up. Because we also quite like cooking. The solution to either eating just Latina pasta or steak all the time, for my beloved, was this cast iron pot. Throw a mini roast in with some potatoes, a carrot, maybe a couple of shallots and as much of a tin of tomatoes and some water as will fit… put it onto the coals of the firepit you’ve had conveniently and cheerily smoking for an hour, and another hour or so later you’ve got dinner.

Things we didn’t realise: that the lid has one direction in which it sits flush. The other way around, it doesn’t. The theory is that this is for those occasions when you do want steam to escape, which I guess could be useful, but… it was frustrating when we didn’t realise.

We also didn’t realise how to care for cast iron, because it arrived sans any instructions about seasoning or care. So we found that out the hard way. Fortunately it’s not the sort of thing that can be easily destroyed, which I guess is the whole point with cast iron, right?

Anyway. The results have been… acceptable. We’ve only used it twice. Once while actually camping when we were quite pleased with how it turned out, even though frustrated by the lid. The second time was to check out how well we’d seasoned it, and that was somewhat less awesome. Partly it was because we used a larger piece of meat so it was squishier and therefore more bits of carrot ended up burnt on the side. Partly it was because cooking a la camping (we still used the firepit, in the backyard) just isn’t the same when you’re not, like, camping.

I think this is going to be a good addition to our camping experience. I think I have to find my recipe for damper as the next experiment.